We spent a rainy few days at home base Amsterdam this past weekend, managing to keep ourselves decently busy without exerting a huge amount of energy. Well, alright, there was one biggish exertion, and then the rest was coasting and hanging out.

We went into the city on Friday afternoon, to pick up my race kit for the 40th annual TCS Amsterdam Marathon. I signed up on a whim when I was still on a runner’s high/lunacy after finishing the Tely 10 in St. John’s this past summer, and figured an 8 km run would be manageable, even if I kind of let myself go over the fall. Some 45,000 people from over 100 countries participate in the different races (a full marathon, half marathon, 8 km, and kids’ run), and the sports stadium was hopping with pump-up music and racing equipment. 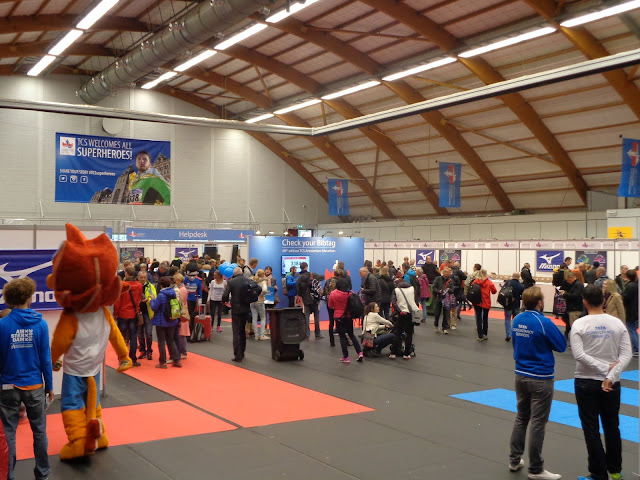 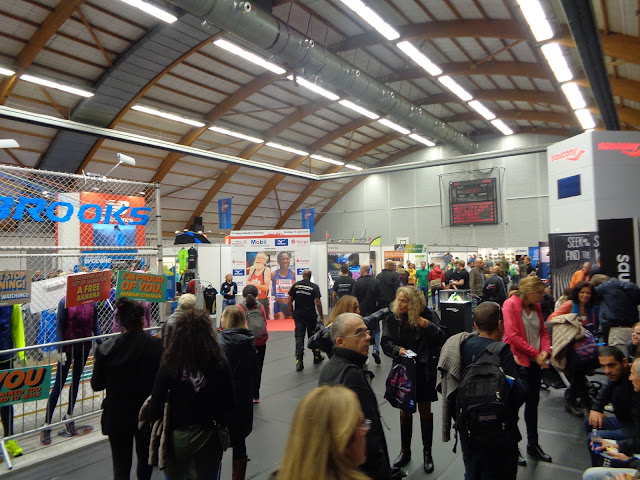 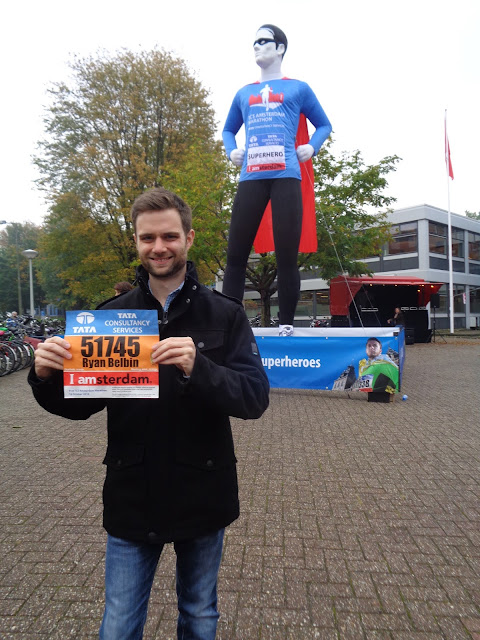 Afterwards, we caught a tram across town, for a dinner reservation at Balti House, an Indian restaurant in De Pijp with a cozy, candlelit atmosphere. We had the place to ourselves at 5:00 (blame our Newfoundlander internal clocks), and had plenty to share with our steaming plates of naan bread, korma, and tikka masala. 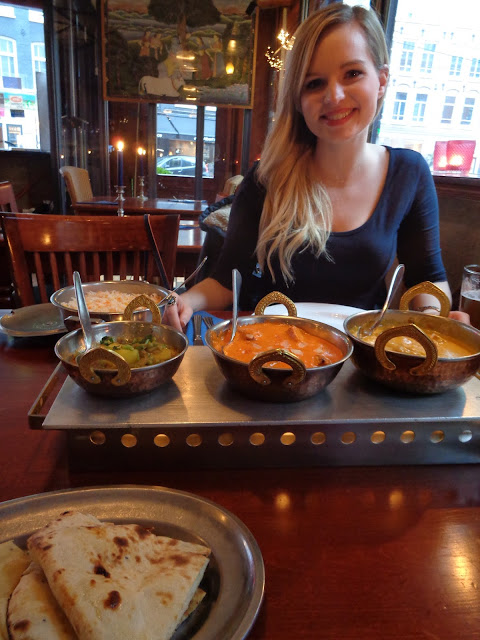 After supper, the autumn evening setting on, we headed to the Van Gogh Museum, incredibly busy every day we’ve gone past it (we tried to visit once before but found the line up too long, opting for some reason to explore the wonderfully weird Stedelijk Museum, a modern art venue where one full exhibit was being led through bare rooms, conversing with interchanging guides on our views of progress and the meaning of life and such), but on a Friday night, a lot more accessible. 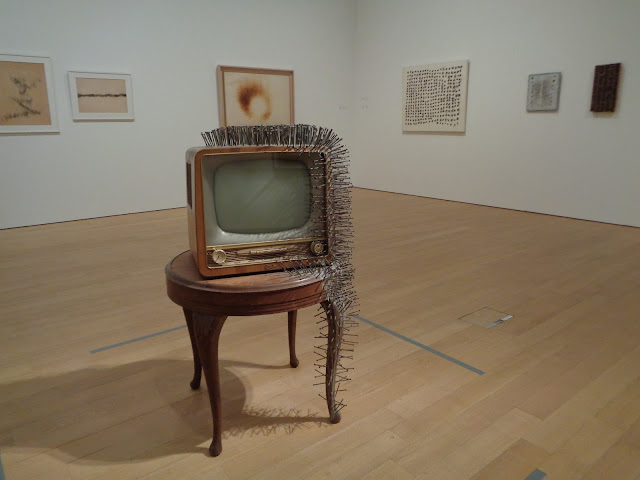 Everyone knows a thing or two about Vincent van Gogh, the post-impressionist dude who pioneered the selfie by producing around 40 self-portraits and cut off a part of his ear. That’s the folklore of the man, an immensely prolific artist who decided, when he was 27, to be an artist (after no real inclination beforehand) and dabbled in many different styles and mediums before his death by suicide ten years later. There are about 2,000 works with his name on them, even though he allegedly only sold a single painting in his life. 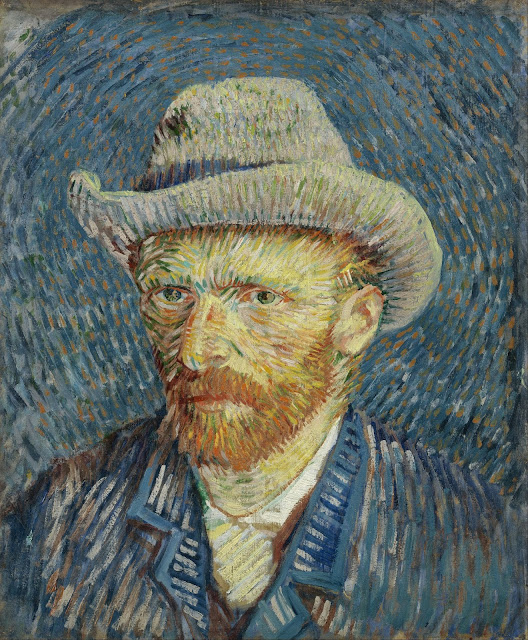 The Van Gogh Museum, a huge, three-floored display of the man’s works, is not just paintings on a wall, but a tour through his life. It turns out that most of the legend and folklore about Van Gogh is mostly true, but it’s one thing to be able to recognize a few key works, and another to see the textured paint on the actual canvas, in between other great works that manage to contextualize a very important nineteenth-century cultural character. 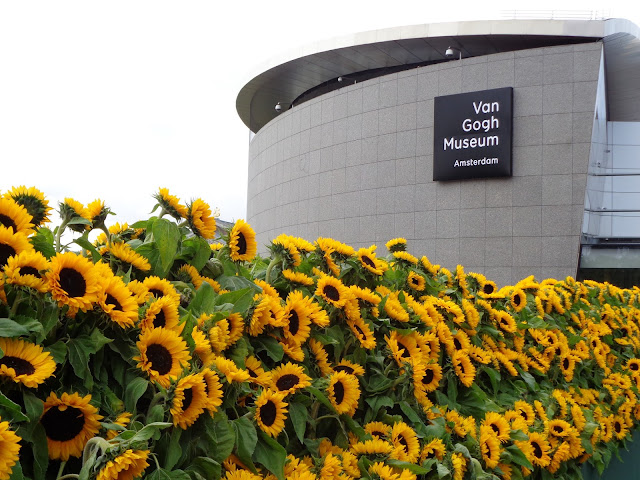 Van Gogh’s younger brother, Theo, was not only his closest friend, but also his financier, who provided the artist with a monthly allowance that allowed him to devote his life to art. Van Gogh’s work started by focusing on the rural life of the peasants, with their earthy, tired faces, and the darkened interiors of their homes. In a letter to his brother, he described the faces of the family in “The Potato Eaters,” one of his most famous pieces, as “something like the colour of a really dusty potato, unpeeled of course.” 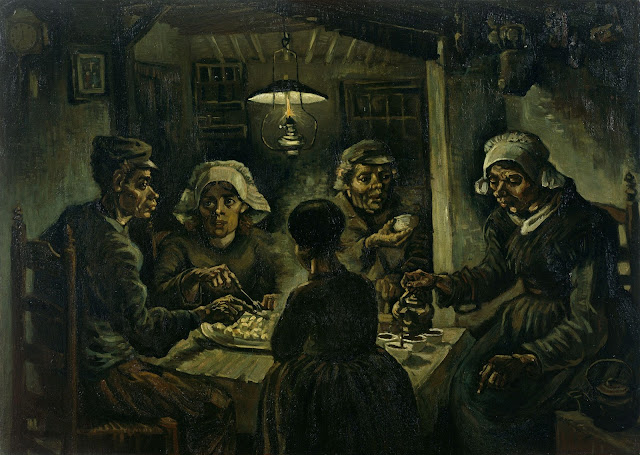 In 1886, he arrived somewhat unannounced at his brother’s home in Paris, and ended up being hugely influenced by brighter colour palates as he sought to reproduce the city in his paintings. Two years later, in 1888, he moved to the south of France, to Arles, where he took up residence in the famous Yellow House with its green shutters. 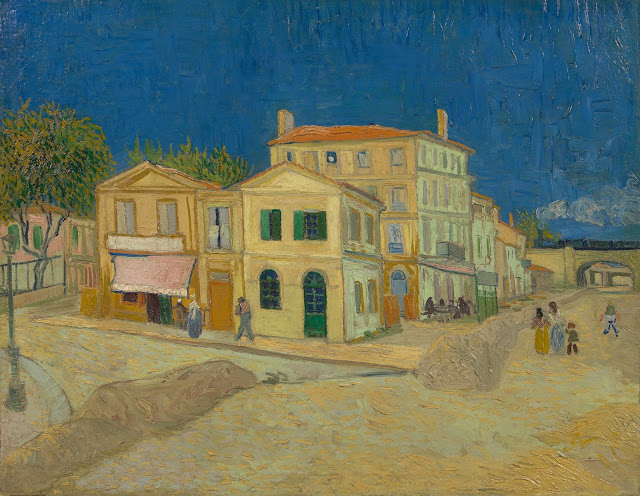 It was here that he fused seven different shades of yellow to produce his sunflowers, opting for the complementing of colours rather than the opposite. There were rows and rows of dazzling self-portraits and rural scenes with delicate blendings of colour, but this vase is one of the must-see attractions, and it didn’t disappoint, even if you know exactly what it’s going to look like. 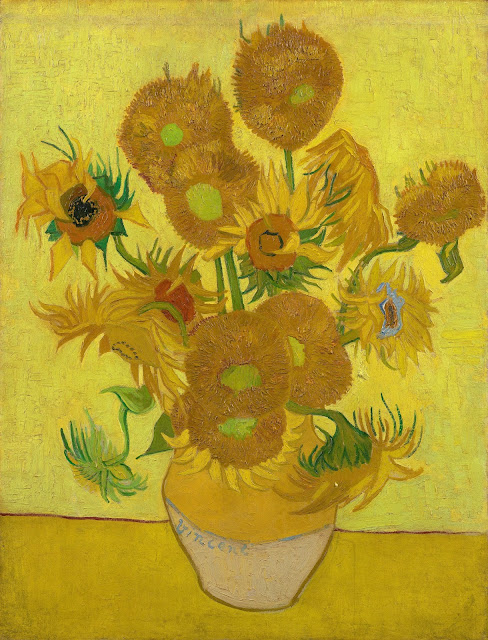 Taken out of context though, what would be the ones that people would flock to see? In my mind, my favourites were “Cypresses and Two Women,” which had beautiful swirls in the dominating tree brances, “Skull of a Skeleton with a Burning Cigarette,” which is exactly what it purports to be (and exactly as awesome as that would suggest), or else “Starry Night over the Rhone,” just because I love the way he presents the night sky (and because “Starry Night” isn’t in Amsterdam). 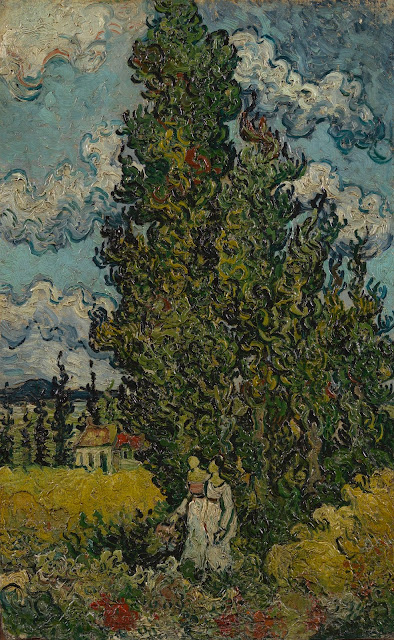 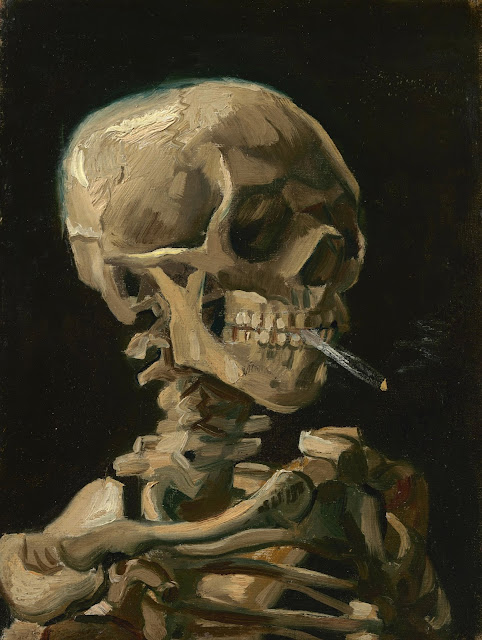 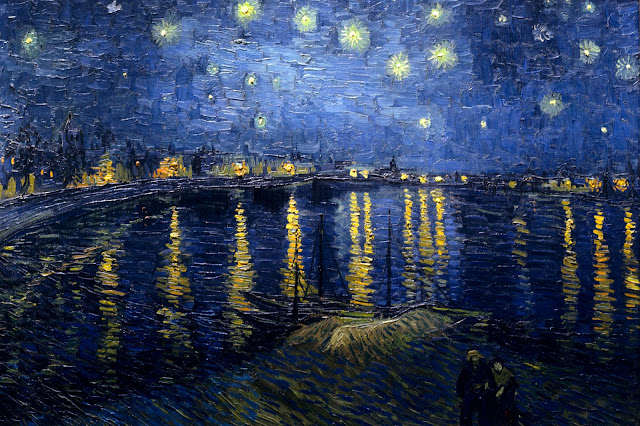 Van Gogh also serves as a really interesting example, to ask why such-and-such an artist’s work should be such a focus point for any moderately cultured human being. Remember, Vincent van Gogh wasn’t a big deal in his life. Somewhere, he went from a nobody to someone that everyone is aware of, but do the millions of people who visit this museum come to see a painting they like, or the works of a man someone told them they’re supposed to like?

In Arles, Van Gogh’s signature style of thick brushstrokes and swirling patterns really came to its own. For a while, another artist, Paul Gauguin, lived with Van Gogh, but the two differed on many viewpoints—it was after a heated argument that Van Gogh cut off part of his left ear. Not overly surprising, in 1889 he admitted himself into the asylum at Saint-Rémy-de-Provence, where he continued to produce huge amounts of work, despite doctor supervision. He spent the last two months of his life just north of Paris, in Auvers-sur-Oise, where one of his final paintings, “Wheatfield with Crows,” may or may not (probably not, but it was a popular myth for a while) have hinted at his suicide by shotgun in 1890.

The man’s life was tortured—of that there is no doubt. Today, he’s seen as a very romantic figure, a troubled artist who achieved no semblance of fame in life, and yet here we are, lining up for ages outside the Van Gogh Museum in a city where he actually had no real connection to. I think the Van Gogh Museum is, for good reason, a must-see stop in Amsterdam, but I need to be absolutely clear that some of the circumstances around the museum are at least a little bit odd.

Part of our visit included a temporary display on Edvard Munch, the Norwegian artist whose most famous subject is trying desperately to protect himself from a huge scream that he cannot suppress—one that appears to be morphing the background as it radiates from his body. Munch did four versions—Kayla saw the “definitive” oil painting on her visit to Oslo, and the crayon version of “The Scream” was present at the Van Gogh Museum. 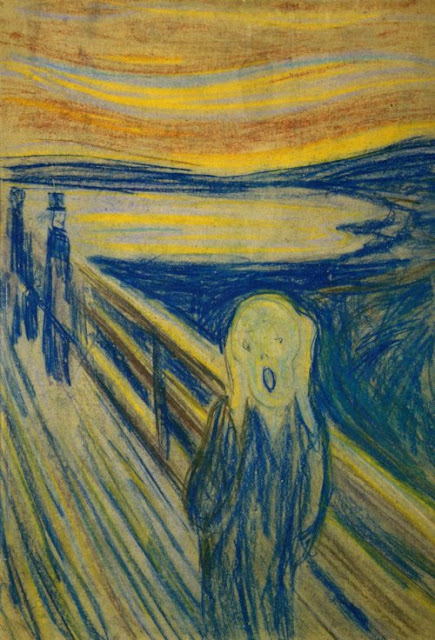 Despite the fact that the two men never actually met, their styles and subject matters are very similar, and so this was not only a unique chance to see them side-by-side in a spacious gallery setting.

ISMA, the International Students Meetingpoint Amsterdam who we chanced upon last month, held a music night on Saturday for international students. Here was a chance for us to bring a few songs from Newfoundland, which we gladly shared in exchange for a night out with some really cool people, which included listening to tunes from Brazil and Palestine and eating more than we should have from heaping pots of chili.

Then today was likely the last run of 2015. Seriously, something happened when we were in Croatia—it got cold. We had to buy much warmer jackets in the interim, because for some reason we thought mid-October temperatures were a Canadian thing. Anyway, after the marathon crowd ushered out of the Olympic Stadium, our group took our places at the starting line, which was nice because the huddled bodies at least lent some warmth to the brisk morning.

The route went through Vondelpark and the Rijksmuseum, back to the Stadium along the edge of a canal. I didn’t exactly let myself go since I’ve been over here, but this was a tough morning—maybe it was the weather, or the lack of enthusiastic people cheering things on, but it was tough. I’m glad I did it, but it wasn’t the most fun I’ve had in Amsterdam, I can tell you that much, even though the actual moment of coming into the Olympic Stadium from 1928 and crossing the finish line was pretty surreal. My legs are still burning a bit. 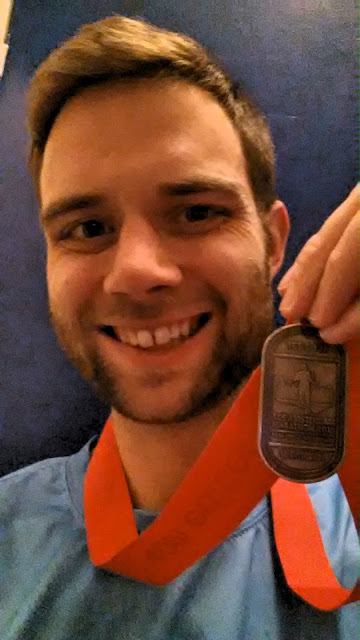 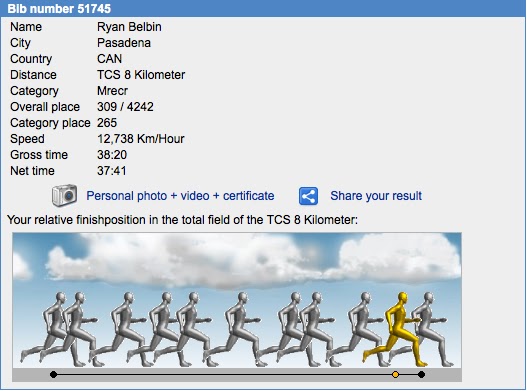 All told, for a weekend at home it was more than a bit busy. Early night tonight, I suspect.

Final exams are this week—I don’t know where this part of the semester went to, but there you have it. Once they’re finished (and I hopefully don’t fail) the second leg kicks off right away. It’s going to be hard to top our time so far, but believe me: we’re going to try.